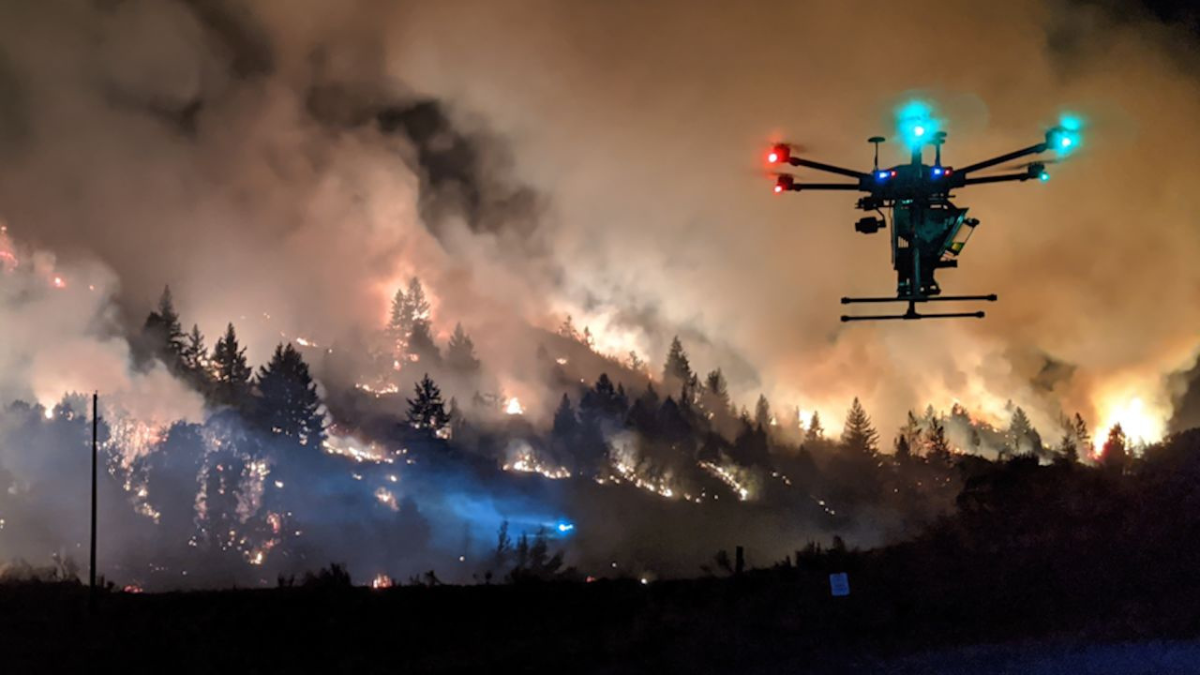 As US wildfires have grown larger and deadlier in recent years, one company is using drones and fire-starting “dragon eggs” to help prevent extreme blazes and save firefighters’ lives.

Drone Amplified, a Nebraska-based startup, is using unmanned aerial technology to improve one of the oldest and most-effective methods of preventing wildfires: prescribed burns. This technique refers to the controlled application of fire by a team of experts to reduce hazardous fuel in areas prone to wildfires. “More prescribed fires mean fewer extreme wildfires,” according to the US Forest Service.

Carrick Detweiler, founder and CEO of Drone Amplified, told CNN that this method works by “doing a very low intensity burn that will basically burn up the dead leaves and sticks that would cause major wildfires when they dry out later in the summer.”

The company was started by two University of Nebraska-Lincoln engineering professors in 2017. In 2020, it was awarded a grant totaling $1 million for research and development from the National Science Foundation and Nebraska Department of Economic Development.

“We can reduce these huge wildfires by using more fire, when it’s safe to do so,” Detweiler added.

While the technique of prescribed burns has been around for centuries (and was even used by Indigenous Americans for wildfire management), it can be laborious and risky at times for firefighters carrying it out today.

Firefighters often must hike or ride an all-terrain vehicle through dense forest or mountainous terrain, carrying a drip torch to start small fires in specific, remote locations, according to Detweiler. “Then you have helicopters with a whole crew on board, flying really low and slow over the fire,” he added of other methods for prescribed burns.

“About a quarter of all wildland firefighting fatalities are related to aviation,” Detweiler said. “And for me, this really was a motivation to start Drone Amplified and get these systems into the hands of firefighters.”

While he said a helicopter can cover a larger amount of area than a drone, he notes that firefighters can also deploy “tens or thousands of our systems for the same cost as a helicopter.” A drone from the company costs about $80,000.

The drones carry so-called “dragon eggs,” or fireballs that ignite when they land on the ground. “They have potassium permanganate,” Detweiler said of the dragon eggs, adding that when you mix this with glycol it starts a chemical reaction — resulting in a fire. Some 400 of these fireballs can be secured onto a single 50-pound drone.

The drones allow firefighters to work at a distance from flames, according to Detweiler, and in areas that are difficult to reach due to terrain or visibility. Moreover, the firefighting technology can be used, “when it’s dark, when it’s smokey, and when other airplanes can’t be out there.”

The drones, which are controlled by an app, can also allow the fire-starting balls to be dropped in very specific locations. Precision is a critical element when conducting prescribed burns, because it is crucial for preventing fire escapes.

While escapes are rare — the US Forest Service reports just one escape for every thousand burns — the outcomes can be devastating. Two recent controlled burns in New Mexico escaped and led to the state’s largest wildfire on record.

Detweiler said his company’s equipment aims to prevent fire escapes through the use of thermal cameras, visual cameras and other technology that lets firefighters see through smoke.

“Our app also allows the firefighter to put in geofences [boundaries] to prevent any ignitions outside of that area,” he added.

While Drone Amplified is already being used by the US Forest Service and other federal agencies, Detweiler said he hopes to see the technology on the back of every firefighter’s truck in the future.

In this article:Drone Amplified, Featured, Nebraska