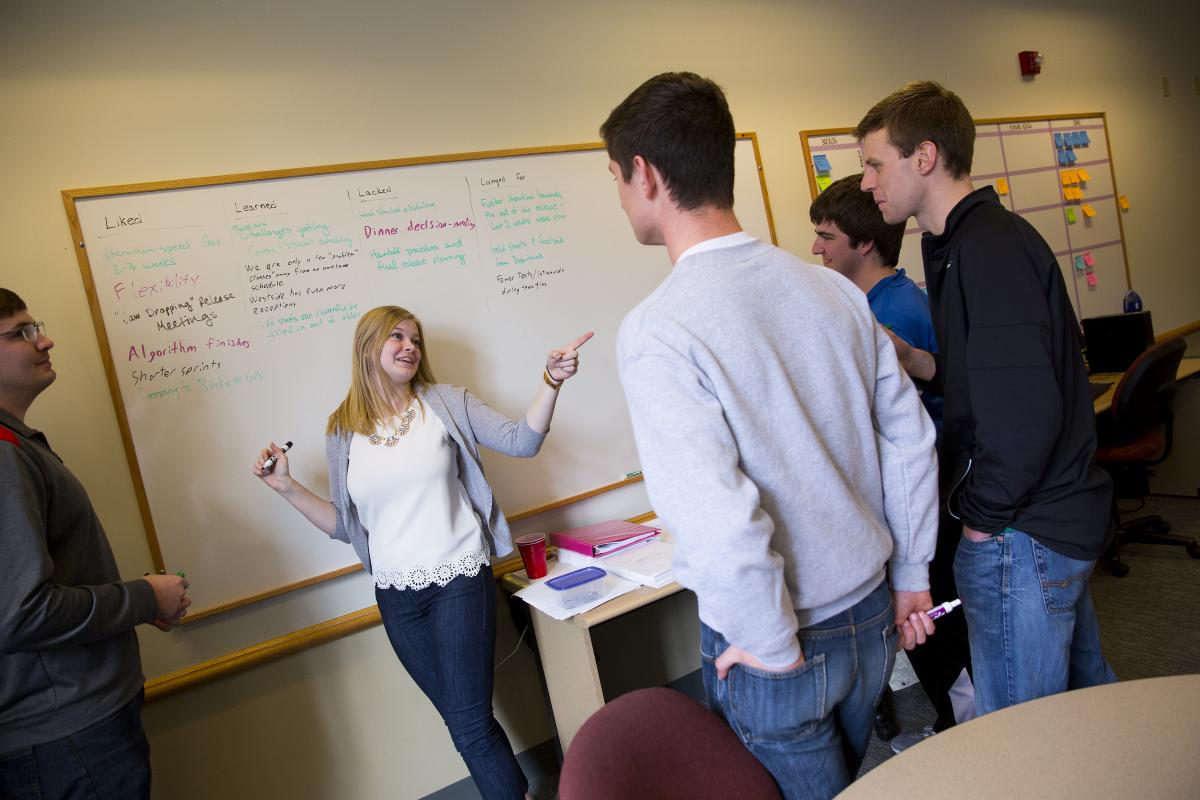 The Raikes School is a small cohort-based school within the University of Nebraska – Lincoln.  The school fosters a well-rounded education that blends disciplines including computer science, business, data science, leadership, and communications.  Additional classwork supplements these areas to allow students the flexibility to major in a variety of topics.

The goal of the school is to produce skilled graduates that learn by doing.  This effort is underscored by the “Design Studio” process.  This process involves tackling real world problems from large enterprises, new innovative start-ups, or even the students’ own ideas.  For example, one of the most famous design projects was the basis for Hudl, a business that dominates the sports video landscape.

The founders of Hudl went to Raikes together and worked on their “project” during their final two years at the school.  As David Graff, the CEO and Co-Founder of Hudl stated in an interview with Mug News, “The Raikes School played a huge role in the three of our personal development, as well as the decision to ultimately create Hudl. The three of us met through the Raikes School—without the program’s existence, neither Brian (Kaiser) nor John (Wirtz) would have ever considered the University of Nebraska-Lincoln.”

Beyond new businesses, the Design Studio integrates with the local startup scene.  For example, during 2020-21, students are working with OpsCompass, a Nebraska-based cloud security posture management (“CSPM”) firm.  Manny Quevedo, the CEO of Opscompass recognized the opportunity for his own firm, but also for the students.  He remarked, “As a Nebraska-based company and a leader in the CSPM space, OpsCompass is proud to help the University of Nebraska-Lincoln students gain real-world experience across a broad cloud landscape.  We are committed to doing our part to establish the heartland as a powerhouse for innovation and new product development.”

The school’s goal is not just exposure to existing companies, however.  The school also instills confidence regarding the role of the student to innovate, and an awareness of the challenges facing new graduates beyond the academic walls.  As Graff said, “Our time in the Raikes School gave us the confidence to pursue our collective dream of starting our own company. Design Studio in particular gave us experience in building software solutions to address real-world problems, and in dealing with real-world customers—experience that served us well as we worked with the Husker football team to build a solution that fit their needs.”

Students at Raikes often work with challenging cloud-based problems as both Hudl and OpsCompass suggest.  These problems often cross platforms and force students to confront numerous inter-disciplinary challenges.  Regarding the recent OpsCompass project, Mark Antonson, Director of Design Studio at the Raikes school stated, “OpsCompass gives our students a glimpse into what it takes to monitor and manage complex cloud environments.  With the OpsCompass software, our students will be able to experience the issues that force cloud environments to fall outside of industry regulations and company budgets.  This will be a vast improvement of the manual processes that our students used to rely on.”

This experience creates demand for Raikes graduates from Nebraska, but also from around the world.  Many students have translated their experiences at Raikes into opportunities at Microsoft, Amazon, and other global technology leaders.  When talking about Raikes and its graduates, Graff indicated his own pleasure to find so many quality candidates for the 1500+ person Hudl – “The majority of our early employees for Hudl were sourced through connections at the Raikes School. The program provided an awesome opportunity to work with others both in our class and those older and younger than us and understand who we worked well with and where their strengths lie.”

Reshma Khilnani, the Board Chair at the Raikes School and a Visiting Group Partner at YCombinator, has nothing but glowing remarks for the students and graduates of Raikes.  “I’m lucky to get to work with many early-career engineers and students through work and the MIT community, and it’s clear to me how great the Raikes students are.”  With few ties to Nebraska or the region, the quality of the program and its unique nature made her take an interest. “I like how ambitious the program is, the administration and the board are committed to finding great students and giving them a self-directed and deeply technical education.”

Their strong belief in the merits of the Raikes School education has led Graff, his co-founders, and early teammates to provide consistent positive public relations for the school.  In many ways the strong alumni and their successful careers are the most effective messaging for the school.  Recently, Graff explained, “When we talk with other companies or start-up investors, many are surprised that the three of us have kept such a strong relationship throughout our 15 years working on Hudl. We’re not at all surprised—although it is something that we’re always cognizant of investing in, from when we first started, we’ve known how each other worked, where each other’s strengths and weaknesses are, and how we can complement each other and lean on each other in certain areas. We’ve known how to work together, and that was a skill we learned through many hours of project time spent together during our time at the Raikes School.”

The Raikes School has been the basis for a number of Lincoln and regional startups.  The unique curriculum and the focus on innovation and technology provides a strong bridge to creating new companies.  But it is also something that Khilnani would like to see happen more, as he indicated by saying, “With the team at Hudl as an exemplar, and the trends nationwide, it seems like an eventuality.”

The Raikes School in Lincoln, Nebraska is a major driver of new companies in the region.  Many of these companies are student-organized and run.  With a history that now spans nearly 20 years, and with multiple examples of successful startup firms, the Raikes School is one of the Middle’s best university programs for entrepreneurship.

In this article:Featured, Nebraska, Raikes School