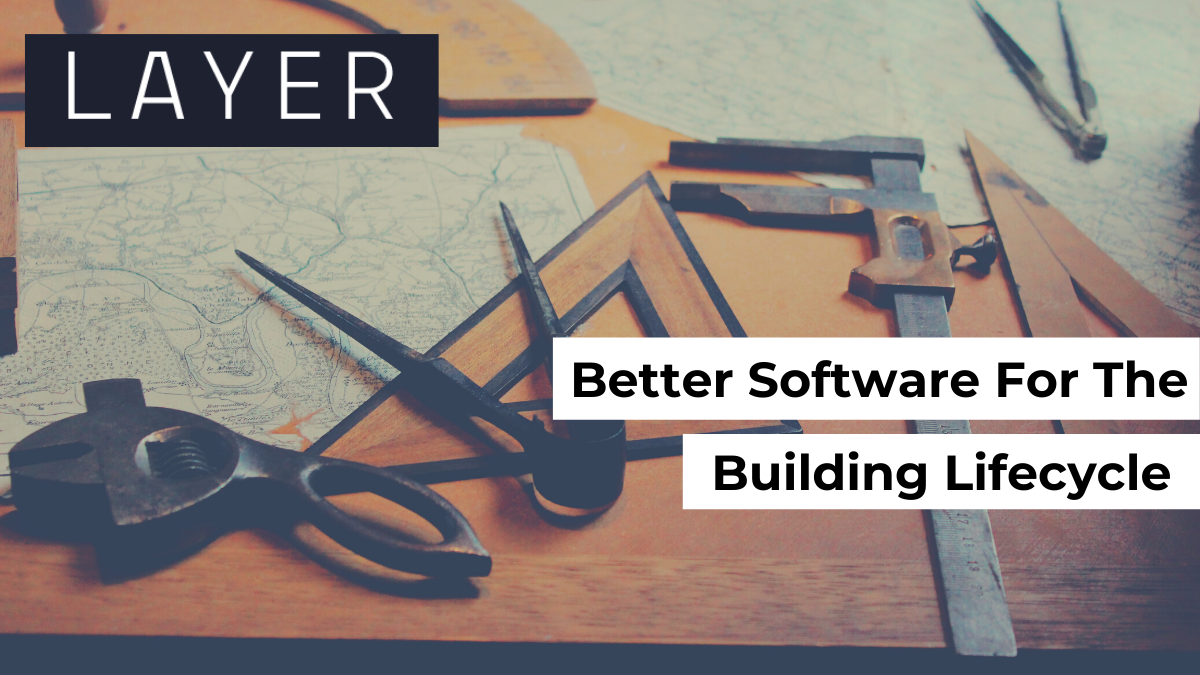 Architect Zach Soflin discovered his inner entrepreneur while working on a project for the government.  He had been an architect for nearly a decade when one of his projects, to rehabilitate the Nebraska State Capitol building, required him to create an innovative solution to a problem.

According to Layer’s website and the story that Soflin related to us in April, the iconic building’s renovation presented a scale problem – a detailed survey of more than 1300 rooms, 1200 windows, and 57 data points per room.  This problem was too unwieldy to solve with the technology that was available to his firm at the time.

Simply put, there was no way to connect the real world project data from the field to the detailed digital model used to design the building.  He needed a new means to organize the digital artifacts – photos, measurements, etc. – to allow him to create the fidelity necessary to design his project.  In addition, he needed to be able to integrate this data into existing Building Information Modeling (BIM) and design platforms, such as Revit.

So, he started a company.  This company is now called Layer.  It is based in Lincoln, Nebraska, and Zach and his colleagues at BVH Architecture, have built a compelling software product that satisfies his and the firm’s architectural and engineering needs.  The firm has won multiple competitions in both architectural circles and entrepreneurial ones.

As Zach Soflin told Architect magazine, “We hear time and time again from architects that they are tired of doing redundant administrative tasks after a site visit.”  For example, the administrative tasks of moving digital images from a camera to the cloud, transferring technical data from their notepad to BIM software like Revit, or even facilitating building punch lists was challenging and time consuming.

The key to any entrepreneurial endeavor is to deeply understand the problem that a company is built to solve.  Layer does this – both through numerous interviews with customers and potential customers, but also because the founders and their team are users of the product also.  They have the problems that Layer was built to solve.

This type of process – called enterprise development – by many is the key to understanding product market fit.  Layer spent a significant amount of time learning from other designers, architects, and engineers what the underlying problem was.  In this discovery, Soflin explained that they understood deeply three different elements – integration into BIM, simplicity of use, and the need to be flexible to adapt to any kind of design/building workflow.

Along the way, Soflin realized that this was not because BIM systems did not work – but instead that they were created to do something different.  BIM originated as the solution for transforming real world and design information into digital elements.  Big software companies, such as Autodesk, have been built to model and manage the information in a built asset.  But, they are so large as platforms that many administrative and day-to-day tasks require significant computing power.  This makes them particularly unwieldy in the field.

Other software companies in the region have also identified different aspects of this BIM dilemma.  The software is great but so huge it cannot be effectively used except when online and in the office.  This means field work is very challenging – reconciling the physical structures with the plans and digital manifestations of the buildings.  Companies, such as CompanyCam or Beehive Industries – both from Lincoln, have isolated individual elements of this struggle and build robust software platforms to solve for digital media and mapping.

In our interview, Soflin made it clear that his company wanted to be the field tool for architects and engineers that blended the field artifacts with the large software systems.  It is a clever iteration on BIM and its real-world dilemma.  By streamlining integration into the large BIM software, Layer both solves a problem but becomes an attachment to rather than a replacement for universal design tools – such as Revit or other Autodesk tools.

Soflin emphasized in our discussion how empowered he feels as an entrepreneur to solve these difficult “built landscape technology” problems.  He loves the design and build of the platform.  And he has really enjoyed integrating user feedback into the refined software.  This experience allowed him to better understand the needs of the users beyond his architectural firm to other firms, but also other types of users.

He also described how challenging the journey has been as he explains a complicated problem to many audiences that have never really considered the software implications of construction, building management, and other build landscape problems.  This has led to occasional frustrations, but often, Soflin said, “he enjoys educating the public about how his company is doing something that is really cool…but technical.”

Lastly, Soflin and I discussed how the community could help Layer.  The company has received a lot of plaudits and awards, but Soflin’s ask was fairly straightforward,

“We still need new users and, of course, customers.  If people can help us make connections, we believe that we can improve the industry.”

This is fascinating because we, at Mug, talk to entrepreneurs regularly.  And this, by far, is the number one request of our readers.  To paraphrase for the general entrepreneurial audience, they say “Help us meet users and customers.  We want to build revenue – but we also want feedback on our product.  We know the product is not quite right, but we need people to try it so we can optimize.”

Zach Soflin and Layer are onto something special.  For more information, check out the company at https://layer.team.