The news on Twitter and other media outlets has been dominated by the “apparently” epic failure of the media stream company Quibi. Here are few examples: 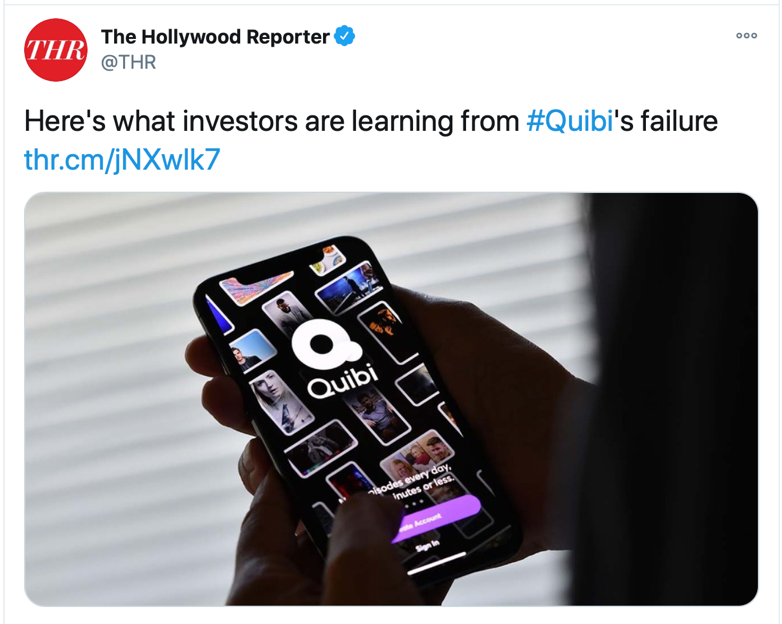 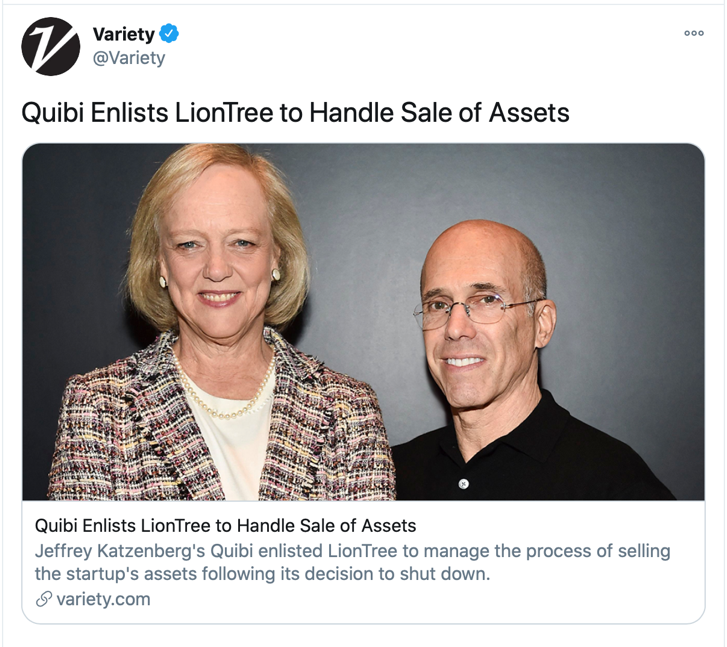 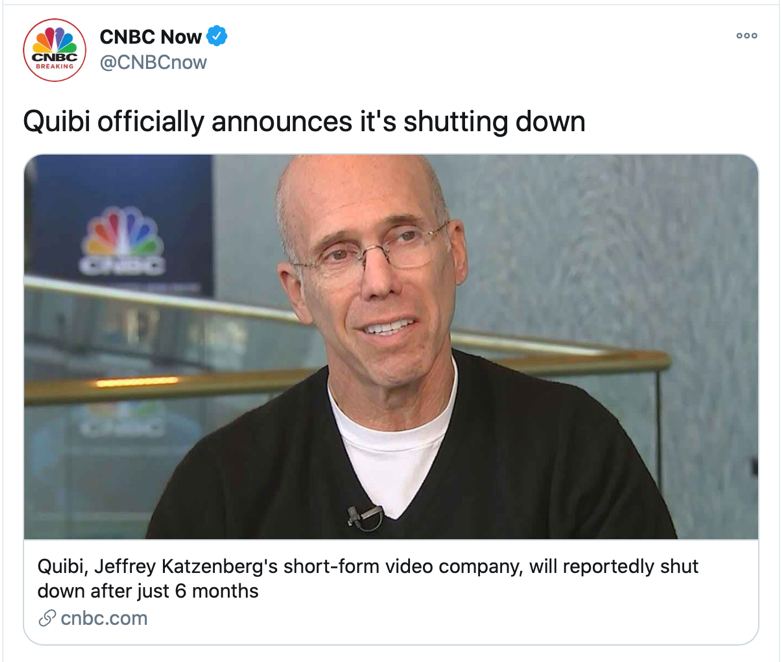 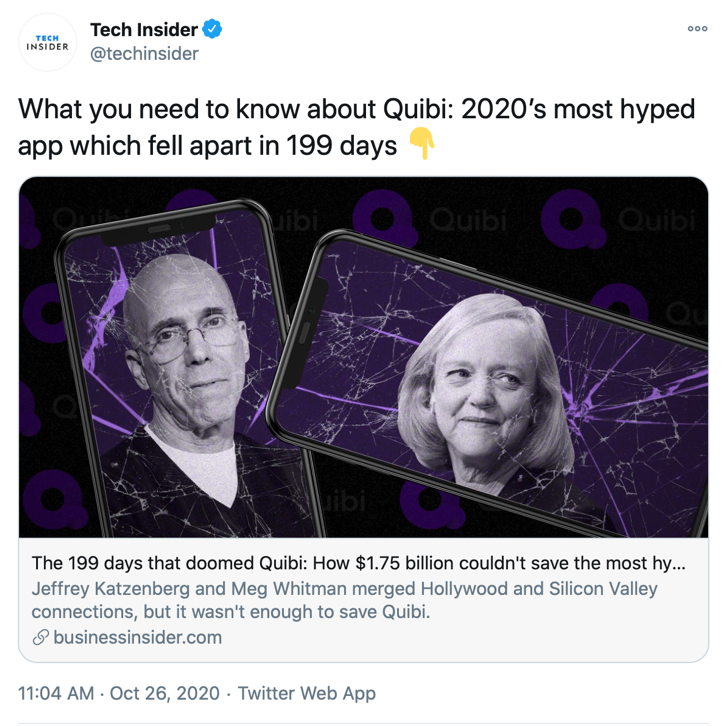 Quibi was so new, I had never heard of it or more to the point didn’t have a need for it.  I had to research exactly what it was to determine why it failed.  So, here are some facts I discovered about Quibi.

Quibi is or was a short form streaming service like Youtube that charged $4 per month. Quibi developed it’s own content and doggedly protected it by limiting the ability to share it.  According to Crunchbase, Quibi raised $1 Billion dollars in venture capital in 2018 and $750 million in March of 2020. Quibi launched its service in April of 2020 and it was downloaded and installed by more than 300,000 users on Day 1, according to Sensortower. Quibi users did not convert to paying customers after the free trial was over.  Some estimates put the retention rate at only 8%. In the end, not enough customers supported Quibi so the right thing to do was to return as much of the investment as possible to shareholders.  Founder Jeffrey Katzenberg said as much in this recent CNBC interview in which he also officially announced Quibi would be shutting its doors. According to a LinkedIN search, Quibi employed between 300 to 400 people in New York and California primarily.  While displacing 400 employees during a Pandemic is bad there is a positive aspect behind burning through 1 billion dollars in such a brief period of time.

Quibi in its short 2-year life span spent more than $1 Billion dollars.  Many have been critical of this as a reckless way of doing business and point to marketing and product failures as the key reasons why Quibi was doomed to fail from the beginning. Many lament the struggle they have had raising capital for their own startups and point to Quibi’s failure as a prototypical example of what is wrong with the system of venture capital in this country (i.e. ideas are not funded based upon merit, but relationships). This is 100% true. VC dollars abundantly flow into unsuccessful ideas and having the right relationships is how deals are made, but cash is the key piece here. Cash is the fuel that the startup engine and ecosystems run on. 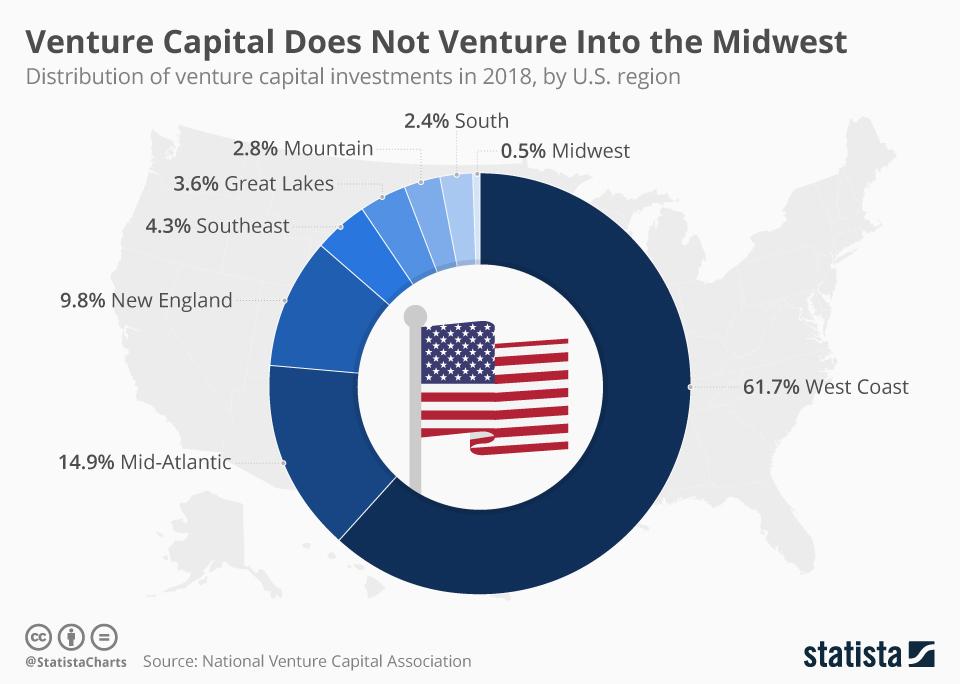 Quibi unlocked $1 billion dollars of cash for their ecosystem and distributed it to creators, employees, consultants, construction workers, food service providers, and many other tax-paying individuals and corporations.  While the failure of the company seems like a negative because it didn’t generate a return for investors and screams of privilege that many founders only dream of, it did generate an economic impact upon LA that is far greater than if that money had been invested elsewhere or remained locked up in some other financial investment like real estate or another institutional portfolio.  This is the biggest struggle startups in the middle face – unlocking traditional forms of investment capital for businesses and startups.

Quibi may seem like the bad guy on the coasts for taking an unfair share of startup capital, but in the middle of the country the perspective is a bit different – stop complaining LA. Coastal startups get 80% all of the venture capital. Included in VC dollars is the economic impact of added dollars to coastal communities in the form of wages and taxes which also will fund and support startups. Imagine what a 1 billion dollar cash investment in Iowa, Kansas, Nebraska, Illinois, Missouri, Oklahoma or Arkansas would look like? My guess is a football stadium so we could go to a game instead of watching highlights on Quibi.