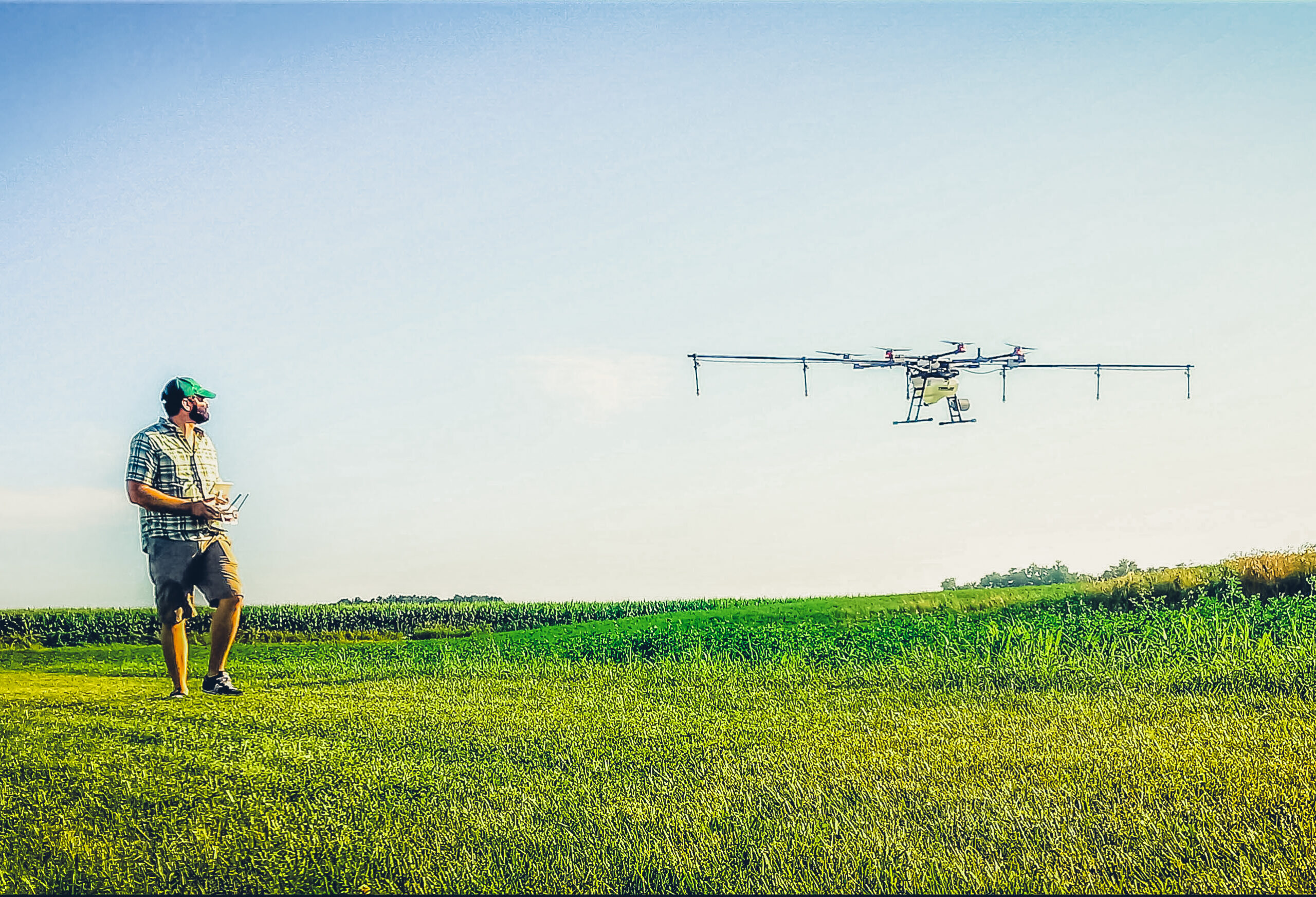 Rantizo, an Iowa City-based drone tech startup offering a unique, easy-to-use and cost-effective solution to agrichemical spraying, recently raised $7.5M in Series A funding. The funding round was led by Leaps by Bayer and included participation from several other agtech investors such as: Fall Line Capital, Lewis & Clark Ventures, Innova Memphis, Sukup Manufacturing, and KZValue.

Rantizo sells agricultural drones and drone spraying services which farmers can request. These drones deliver targeted sprays precisely where they are needed for various agricultural applications. Rantizo’s upgraded DJI Agras MG-1P Drones are currently being used by 30 contractors in 15 states throughout the Midwest and are becoming more popular among farmers thanks to the wide range of agricultural applications (i.e. herbicides, insecticides, fungicides, pollen, cover crop seeds, and more). This wide range of application is partly why Rantizo became Iowa’s first legally authorized drone company for aerial application of agrichemicals.

With uses for Rantizo’s drones becoming more standardized, we asked Michael to provide a real-world example of how his drones are being used by his customers.

“A recent client of ours owned a field that had a few unplantable wet spots due to continuous rainfall. With our patented technology, we mapped the location of these wet spots and precisely dropped cover crop to reduce moisture and weed pressure exclusively in spots with high concentrations of water. Ultimately, this was a safer and more efficient way to handle this problem, which couldn’t be solved using a traditional method.” Michael said.

The company has seen a dramatic uptick in business since its founding by Michael Ott in 2018.

“This year, Rantizo received requests from growers and individuals all over the country looking for drone application services,” Ott explained in a press release. “We did our best to fulfill those and realize that we need to continue to expand our network,” he continued. “We want to make sure we have Rantizo Application Services providers in place to keep up with demand. Securing this funding is a crucial piece of that strategy,” he added.

The company’s revenue strategy consists of a couple of revenue streams. Customers have the option to either purchase the ag-drones themselves or hire Rantizo for spraying services. In 2021, Rantizo is planning for both new product introductions and expansion.

“We anticipate rapidly expanding our Contractor network in 2021, with plans to be in 30 states and bring our Contractor count to over 100,” said Ott in a press release. “There will be more Rantizo drones in fields delivering solutions for growers, which has us very excited.

Rantizo is constantly refining and improving their product’s design. As Michael explained, his company’s drones covered only five acres per hour back in April of 2019 and cover 14 acres per hour today. But wait, there’s more. In July 2020, his company received approval from the FFA for drone swarming, enabling Rantizo to use up to three drones per field, each enabled with 14-foot booms.

“With these approvals we became the first and only company approved for nationwide swarming of up to 3 drones in rural areas,” said Ott. “This allows our contractors to increase productivity significantly by tripling the capabilities of Rantizo drones with a single pilot.”

According to Rantizo’s website, the global chemical application market is a $36 billion industry; chemical effectiveness is decreasing, leading to increasing application costs for farmers. Moreover, with crop prices significantly below their 2011-2013 peak, farmers have cost efficiency in mind.

With this in mind, here is what Michael had to say about starting his company.

“I like to be really efficient in the field,” Michael said. “At my previous job, I invented a way to precisely deliver a tiny amount of nitrogen on a seed. At that time, I thought to myself ‘how can I replicate this concept?’ and I thought of drones as they were just becoming cost-effective.”

It wasn’t long after that Michael pursued his innovative idea and Rantizo was born. His company utilizes drones to apply both liquids (pesticides) and solids (seeds, pollen, beneficial insects, etc.) to fields. Additionally, Rantizo is the only company that has acquired necessary permits on both the state and national levels to legally pilot drones, particularly for agricultural purposes. Michael explained that this has certainly given his company a competitive advantage over other competitors. He also mentioned that the regulatory process surrounding drones is proving to be the biggest obstacle that his company has had to overcome. Despite this obstacle, he is preparing to acquire permits for every state across the nation, one state at a time.

As an entrepreneur, Michael stated that he loves putting people in a position to succeed. He also opened up about the importance of team building, stating how crucial it is to recognize your weaknesses by recruiting team members that are proficient in areas where you may lack.

Michael has quite a portfolio of great experiences as founder of Rantizo, however, there was one story that stuck out the most to the Mug.News team. Michael explained that Rantizo was a late addition to a past pitch competition. To his own surprise, Rantizo ended up winning the pitch competition, awarding his company $20,000. As Michael explained, this was money that he had not anticipated receiving for his company. Therefore, he wanted to do something special for his team. Using the money from the pitch competition, Michael decided to write checks for each member of his team and call a team meeting. After expressing his gratitude for his team, he surprised them with bonus checks that he taped underneath their chairs.