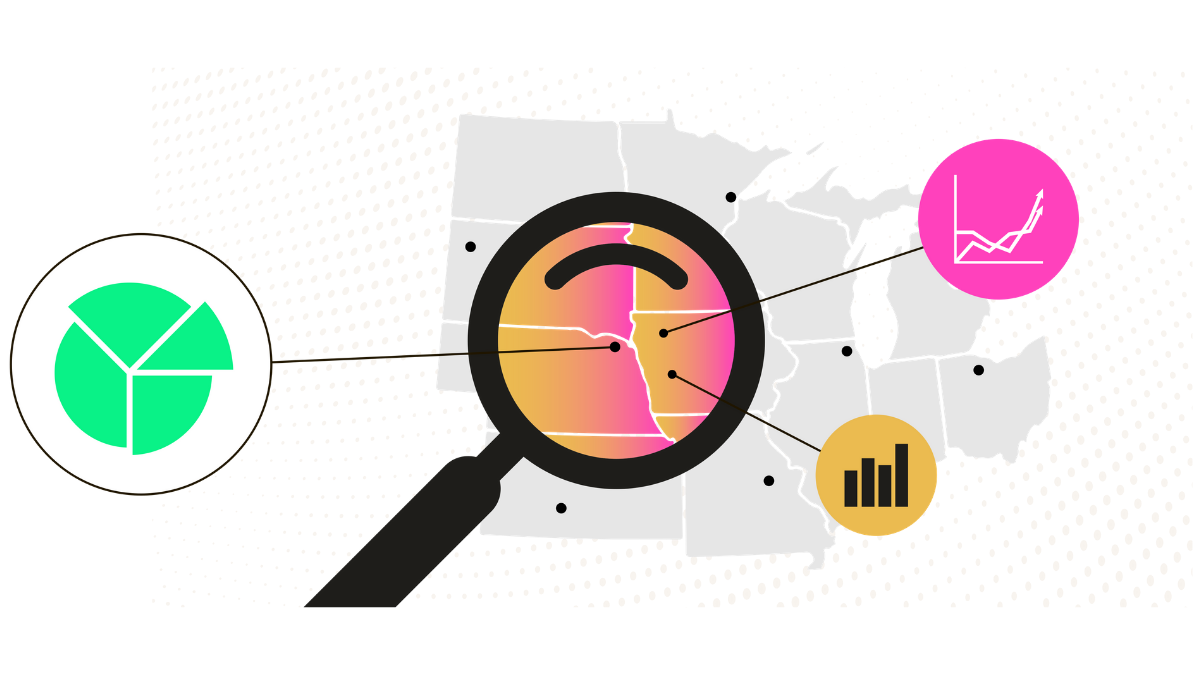 In late March of this year, the Bureau of Labor Statistics released their Occupational Employment Statistics measurements for May 2020.  We were particularly interested in the effects of COVID-19 on the “Cool Jobs” measurements that we utilize for much of our work. We thought that we would share an overview of the data and our high-level analysis.  [If you are wondering what Cool Jobs are and why we use them – check out this explanation.]

First, the COVID-19 pandemic appears to have had significant effects on overall job numbers but relatively muted effects on the Middle’s “Cool Jobs” numbers.  Communities in Michigan, Illinois, and Ohio appear to be the worst hit.  With significant job losses in large cities – Detroit, Chicago, and Columbus.  Moreover, communities that had been trending downward in “Cool Jobs” saw continued declines – such as in communities like Flint, Youngstown, Rockford, and Decatur.

To better explain this data, we put together three maps that display information about communities with peer sized communities.  First, large communities were generally adversely affected.  In the Top 20 communities in the region for “Cool Jobs”, only Madison, Indianapolis, Kansas City and Des Moines saw positive job growth.

And, some of these communities also saw significant wage growth.  For example, wages in Madison jumped 4.3%.  This suggested a continued surge of demand for technical job seekers beyond a simple bump to a single business or two.

In addition to the bump in wages in Madison, every single community in the top 20 saw an increase in average wage across “Cool Jobs”.  This reflects not just inflation (in most cases) or cost of living increases – but it reflects the continued pressure to find technical talent to fill open roles.  For example, the Nebraska Tech Collaborative, a workforce initiative of the Aksarben Foundation, commissioned some research that highlighted more than 2000 open technical jobs in Nebraska – at the same time that total technical job growth in the state was muted (and Omaha lost jobs).  This suggests that the quest to find technical talent was unabated during the pandemic.  Companies continue to seek key hires.

Instead, the data seems to suggest that companies were trimming parts of the organization that were no longer essential – or communities saw job decreases due to dependence on certain industries – such as travel, hospitality, and transportation.  As those industries trended downward, communities with dense industrial workforces saw more extreme decreases in “Cool Jobs”.  A good example is Detroit which lost nearly 17,000 jobs from 2019 to 2020 in technical spaces – many engineering and software related.  Below is a map of job reductions by the percentage of total change.

Beyond the job decreases, some few communities also saw wage decreases.  These regions appear to be the communities most adversely affected by the pandemic – because many saw job decreases AND total wage decreases meaning that many of the top employees or highest paid jobs in the market saw significant decreases.  For example, Wichita saw a significant decrease in wages and a decrease in total engineering jobs.  This suggests that the aerospace effect (where Wichita has a significant LQ) represented a significant hit to the economy because it represented job and wage retraction – a double whammy.  This appears more likely to carry forward for a longer period of time than some of the other job or wage losses affecting communities.

What Does This Mean?

Sometimes shocks to the system provide instant negative, but rebounding economic effects that outweigh the short-term negative hit, such as providing a context for firms to reduce employees or change behaviors to innovate or spend more resources on a new opportunity or a shift to more remote work leading to more employment efficiencies.  This may be the case with the pandemic for a few firms.  However, this can also be a narrative created to prevent judgment or provide justification to a negative economic event.  We believe that the pandemic is probably more of a short-term (3-5 year) negative economic effect rather than a recalibration or jumpstart opportunity.

Some firms, however, will be exiting the pandemic in better shape and able to grow – despite the negative effects.  The government’s stimulus has helped many firms survive and improve their balance sheets.  Moreover, many firms took the opportunity to start new ventures or new product lines (Mug.news is a good example of one of these new spin-ups).

To underline this idea, many regional startup ecosystems in the Middle are seeing an increase in activity – startups and first fundings.  This activity was not caused by the pandemic but by individual entrepreneur’s response to the pandemic – providing a justification or opportunity to start something because of their newfound situation.  Sometimes necessity is the reason for innovation.  This suggests that some ecosystems may be benefiting from the job loss – creating new firms and high growth enterprises.  This would be a positive outcome from a negative economic event.

We believe that local strategies to facilitate better startup ecosystems – reducing friction to find capital, customers, and co-founders – will be the key for community rebounding.  A community that facilitates a strong entrepreneurial response is likely to suffer less long-term economic hardship.  A community that struggles to reduce startup friction will be adversely affected for a longer time.  Thus, we hope communities are looking at the pandemic as both an awakening to the importance of entrepreneurship and an opportunity to reduce friction in their local startup process.  It appears from early returns that many communities in the Middle are doing just that.